I didn’t have thoughts of killing myself or anyone, but I needed to talk to someone that was out of the whole conversation who I could share my feelings and fears with.  Someone who could possibly help and get some answers to the unknown. 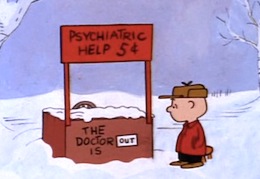 I was in desperate need for help.  I did not know what to do, if I told people around me they may send me for a mental health evaluation.  However, I knew my feelings, thoughts were real.  I needed to make sense of everything and I needed to start talking right away.  What happened for 2 weeks of my life.  Not being able to remember was the scariest thing by far.  Now to figure it out.  I knew I needed help, a lot of help, to figure everything out.

After admitting I needed help (some would say crazy), him and her appeared like angels from the sky.  I was to learn that they both were there to help me.  Immediately, she turned me off.  I did not like her.  She made me put my guard up, I did not want her in the room, she was too full of herself and needed to come back to reality.  I didn’t want to talk a person that everything she said was a duplicate of Freud.  However, “he” was different.  He was taking everything in and kept staring in my eyes, sending me messages that everything was going to be fine and calm down.  I finally, got up the encourage and said to her, “Who is he?”

“He” was a resident studying to be a counselor/psychologist.  He was a newbie, fresh out of college, wet under his wings, and was trying to learn from this lady that currently was his mentor.  I could tell by the looks and his body language that he did not care for her much either but had no choice and couldn’t stand up to her as he was just a nobody in his career still.  I politely asked her to leave, kinda, and asked him to stay to talk with.  I remember her giving him a look and walking out the room like a diva.

He made me feel comfortable and I didn’t know him from a hole in the wall.  The next thing I realized I was in tears uttering nonsense to him, getting it all out.  I think I saw his mouth open because of everything I was saying.  Honestly, I don’t think he knew what to say except everything is all right and that he is there for me.  I swear we talked back and forth for over a half hour.  Just going back and forth.  It was a conversation, not just me telling him everything, and him just nodding.  He seemed to understand, or at least faked it very well.  Unfortunately, the evil witch came back and informed him that they needed to go and see another patient.  He promised he would be back on a daily basis to talk.  I could not wait, to see him.  For now, he was my outlet.  A sounding board to say the least and I have never felt so more comfortable.  It felt so good to be clean.

The only thing was I don’t think I ever got his name, but he kept his promise and I saw him everyday…..